“Morning has broken” for us at Barking Sycamores. Because we believe so strongly in the importance of neurodivergent artistic communication, we offer a medium by which neurodiverse poetic voices communicate inner thoughts, visions, and interpretations of ourselves and the world around us. And this, we think, is a very “ausome” thing.

Indeed, a new day is dawning. In the last few years, the goal in the world of autism has begun to shift from “awareness” — which has been a flawed message full of fallacies, misconceptions, and stereotypes — to acceptance, which promotes the idea that autism, ADHD, bipolar, and other similar states of being are simply valid neurological differences as opposed to disorders. But there is still much to be done — which is why Barking Sycamores is here. And our goal is a larger one shared with many other neurodiverse individuals and organizations — to pave the way from the acceptance of autism and other neurological differences to an understanding of them. To accomplish this, we have chosen the path of activism through art.

As for us neurodiverse writers, we are a a cadre of wordsmiths offering our songs and visions to the world — whether we sing of the glorious and divine, whether we sing “under torture” as Arthur Rimbaud put it, or we give voice to the colors in between. A few of these profoundly creative and “ausome” folk have been featured in our first issue.

Some poets are truth-tellers, distilling their observations and experiences into word-weaved visions.

“Some see a universe filled with a fierce beauty
that the ‘normal’ could never imagine”
“The One Who”, Amy Barlow Liberatore

Other poets offer a touch, a word, or a witness to our common humanity — and within these gifts to us, offer comfort as well.

“This poem dreams your original face
bears witness to all your struggles, your sorrows,
licks your tears everywhere they fall.”
“Poem to Change the World”, Barbara Ruth

Some poets challenge the reader to open uncommon doors and shift the lenses through which our cultures — our mores, stories, legends, and fictions — are viewed.

“The overstimulation
Of the senses inspired the creation of his own
Cypher, the stimming fingers, a calming mechanism, the silent
Knowledge of which only Watson witnesses.”
“A Sleuthian Acrostic”, Lucas Scheelk

And still others report of new worlds and cultural realities even as we humans are creating them.

“I step large through ghost worlds,
using my deus ex apparatus
to influence my peers at a distance,
a digital extension of Hamlet’s ghostly visitation.”
“Autocyborgography”, Michael Scott Monje, Jr.

We invite you to read our first issue, which is publishing right now. Many “ausome” poetic voices have been featured, and more are to come throughout the issue period. You will encounter visions of all kinds — the glorious, the painful, the real, the raw, the….us. We, the neurodiverse, are creating without apologies.

And we will never stop. 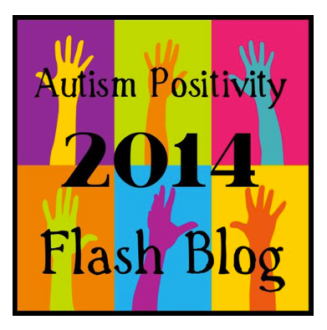 This post was shared by the editors for this year’s Autism Positivity 2014 flashblog event on April 30, 2014. If you want to participate, see here for instructions. You can also read other writings for the flashblog event here.

It’s April 30th. The last day of Autism Acceptance Month. And the day of the third annual Autism Positivity Flash Blog. I didn’t write for the last two iterations. The first one, I didn’t hear about. I was not part of the online Autism community at that time because I was taking a break from the stress of things — I had met my first local Autistic adult and it turned out horribly with stalking and threats. And I was living with a partner who hated autism and Autistic people. I did not know that I am Autistic when I got together with him and my diagnosis was pretty devastating for the relationship (which still somehow continued for another decade afterwards.)

I first learned about this project a few months after it launched for the first time and I was kind of shocked into silence. You see, I have a tendency when frustrated to treat Google as a sort of oracle. I will type a complete sentence in, like “He calls me stupid all the time but I’m really smart.” Once I typed in “My rat died and I’m very sad.” The hits that are returned from these sorts of non-questions are often enlightening, sometimes comforting, sometimes informative.

So I honestly don’t know if I’m the person who typed, “I wish I didn’t have Asperger’s,” but it was so much like the sorts of things I do type into Google when I’m feeling lost and distressed and, with all the stress I had in my relationship and with university and fighting for accommodations no one wanted to let me have and getting accommodations that just made my classmates so angry they bullied me so much I wished I had just dropped the class instead — I did actually drop out of becoming a math major because the attitude toward accommodations in that department was so hostile that I knew I wouldn’t be able to finish the degree either way — with all that going on, I was having a really hard time and so much of my stress and struggle was centered around being Autistic.

I will never know if I’m the person who triggered the first Autism Positivity Flash Blog or not, but it was so much the sort of thing I would have done, that I could only sit in shock and read through all those letters to . . . . if not me, someone exactly like me.

So I didn’t write last year because I was still too overwhelmed by the bigness of it all. I sat and read every single entry from that first year and I cried a lot and, most of all, I felt supported. I was afraid to say anything to anyone about the possibility that it might have been me they were writing to. I figured it didn’t matter, because whether it was me or not, there are so many other people out there who desperately needed to read those words. There are hundreds, maybe thousands, of “me”s out there feeling miserable about the cards life dealt them and wishing they could play any other hand but that one. And I still have no idea if it was me or not, but I’m revealing now that it might have been me because it’s important to know that if you are going to understand what my Expression of PosAutivity really means: it might as well have been me and this project gave me something to rejoice about at a time in my life when there really didn’t seem to be anything good about me or my Autistic life.

I didn’t necessarily believe every word that I read, but it awakened something in me. A few months later, I re-opened this blog. I had shut it down after the bad experience with the local Autistic. I was afraid and I was ashamed. I re-opened the blog and in that first post, I published my photograph and my full name. I was protesting Ann Coulter’s use of the R-word and I was putting myself out there to say “this is who you are hurting when you use that word” and also putting myself out there to say “I am no longer afraid and ashamed. I will be known.”

So the joy I want to write about today is this: life dealt me a hand but it wasn’t Aces and Eights. Sure, I haven’t figured out what to do with that Trey of Hearts yet, but it’s not a Deadman’s Hand and, what’s more, the cards are merely slips of paper that only carry as much power as the players choose to assign to them. What life also dealt me was a table filled with players who have decided to turn the game into something we all can win. I am seated with great people who want to help me figure out where that Trey goes. I am seated with generous people who are willing to show me their cards so we can all play together instead of against one another.

I still struggle with the notion of “Autistic Pride.” It’s not easy for me. Inch by inch, I approach it. But in those dark times when I am unable to take pride in myself, I can always look around me and take pride in my community. We — Autistics and allies — are strong, brave, loving people. We are people who work hard to make the world better for us and those who will come after us. We are people who will take the time to write anonymous letters of hope and love to people we’ve never met — anonymous people crying out for some relief from the pain. I take joy in my people, my tribe, my family.  We are a loyal people, an understanding people, a forgiving people. I am honored to sit at the table with the wise and noble souls I find myself surrounded by.

I no longer refer to myself as “having Asperger’s.” For one, it’s now a historical term, like Dementia Praecox or Invert or Hyperkinetic Reaction of Childhood. For another, I’ve learned that what I am is Autistic and I have no need for a special label that attempts to place me in some hierarchy of “functioning levels” (and couldn’t place myself there very well even if I tried, since my “function” is so variable from task-to-task and from day-to-day.)

But also, I no longer wish I didn’t have Asperger’s (or autism of any stripe.)  I’m dating someone different — someone who loves me and admires all of me and understands that I am who I am because I am Autistic, not in spite of it. I am on a different life path so I am no longer fighting with a university for accommodations I need but am punished for requesting. And I can now see that being Autistic is not only who I am, through and through, pervasively, but it is something that connects me with a warm, welcoming, compassionate community of the most decent and loving human beings I’ve ever met in my life. Not a perfect community, because it’s made of people are none of us are perfect. But a community that has repeatedly taken my hand and helped me up when  I fell to the ground and lay there, hopeless.

This is what I am PosAutive about. Being Autistic put me in the middle of the grandest community of people I could ever have hoped to find.