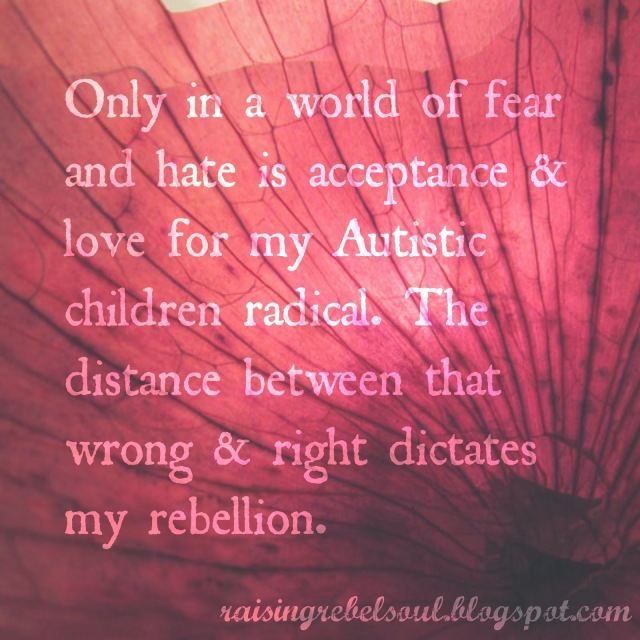 Being a writer has been my good fortune in the Autism community. When I began to record our journey here, I did so because I thought that we were traveling in a direction unknown. Most of the parents of Autistic children I first encountered while searching for answers and support followed the belief that their child needed therapies, remedies, and miracle cures. I wanted to walk in love. I wrote that down. I was fortunate because though I felt alone as a parent, the Autistic community started trickling into my life. They were already walking in love. Radical love. They gave me some.

As things went on, I came to understand that Autistic people were in a battle for basic human rights. Sharing the joy and comfort my acceptance has created in the relationship I have with my children was important, but I realized my writing is significant to more than just our family. It allowed me to share parts of the Autistic story. They don’t want therapies, remedies, and miracle cures. Autistics want acceptance. It is their right to be included. It is their right to govern their own bodies, minds, and lives. It is their right as human beings to be treated with respect. “All human beings are born free and equal in dignity and rights” and that means Autistic people too.

The general public is so overwhelmingly afraid of Autism, the acceptance I have learned to give my children is often portrayed as extremist. I do what most parents do. I love my kids. Mine are Autistic and suddenly my love becomes inconceivable. The record I keep here is deemed deviant. Eccentric. Indulgent. I must be mad. But, it’s the distance between the wrong and right, between fear and acceptance, hate and love, that dictates my rebellion. Justice is just too far from reality. Simply asking that my Autistic children’s rights to equality and dignity be honored, makes me an activist.

That disparity, those rights withheld are what put the radical in Autistic love. Imagine giving what has only been denied of you, or, accepting yourself while the world is afraid of who you are. What we offer the disabled is less than they deserve. What we take away is shameful. Refusing to respect Autistics as competent and worthy human beings is our indecency. Each action taken by them to oppose this repression is an act of love. Love for themselves, for their people, and love for those of us so far far behind. Radical love. Get some. I write on.

The preceding essay was written for the annual Autism Positivity Flashblog. The theme 2015 is Acceptance, Love and Self Care. Join the celebration with positive perspectives of Autism on Facebook, Pinterest, Tumblr, & Twitter!

Today I am writing in honor of the Autism Positivity Flashblog 2013! Proudly partnered with a wonderful group of bloggers, I have been working behind the scenes to help organize this production. This year’s theme is “1000 Ausome Things about Autism,” which is an attempt to focus on and accumulate positive aspects of Autism. It is about time we all gave our attention to the qualities of Autistic life, as opposed to the mythic story that has already been told. I have two Ausome Autistic children. I love them each dearly. Today, I offer two Ausome things about Autism to add to the list.

The most powerful and Ausome thing about Autism, to me, is that Autistics are deviant from the norm. I happen to have a deep appreciation for diversity and I always have. Along my personal spiritual path, I recognized early on that diversity is the essence of life. It is at the center of progress. It is the change that we all need. The difference. The curiosity. The vantage. The spark. The idea. The shift. Diversity is sacred to our survival as human beings. In fact, I am challenged to figure a more significant kind of diversity than differences in our perceptions and thinking styles, than the differences in our given brains. We need the focused and gifted minds of Autistic people, and we need to properly honor them. This world needs my young sons.

We need those kinds of minds that can triple major their way through college, like Alyssa.

I have never been surer of anything in my life. Neurodiversity is Ausome!

An easily noticed commonality spreads across the spectrum of Autistic individuals. It is a natural drive. It is perseverance. How quickly the average human simply gives up in comparison. Recognize how far Autistics have come in just the last few decades, from being hidden in institutions and under forced conformity, to tenaciously taking down such institutions (Lydia Brown) and diligently demanding acceptance (Paula C. Durbin-Westby). Autistics won’t quit, and thank goodness for it, because perseverance is a virtue. The persistence within Autistic people leads us all to wondrous places.

Though my initial intentions were to offer just two Ausome things about Autism, as I wrote this essay the truth came out, and in actuality, I gave you 14 examples. And here is one more (that’ll be 15); Autism is Ausome because Autistics are Ausome! Once you comprehend this, once you get to know them, there is no denying their truth. A heart felt thank you, to all my Autistic family and friends. You are absolutely Ausome!